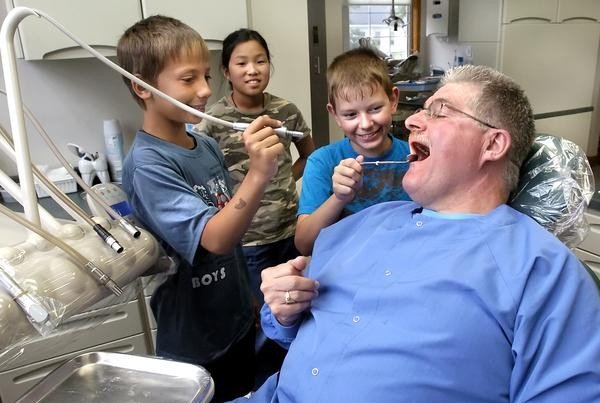 “They were apprehensive, as most kids are apprehensive about having dental work done,” said Bagnall. “Because of where they come from, they had a lot of cavities.”

Both Stovpet and Osipenko, who live in an area that’s still suffering the effects of the 1986 Chernobyl nuclear disaster, came to America to receive medical and dental treatment.

As participants in the Chernobyl Children’s Project, Stovpet and Osipenko spent a month with host-mother and Andover resident Amanda Righter. The boys were also given four hours of dental work each by Bagnall at no charge.

Though both Stovpet and Osipenko live about 60 miles from Chernobyl, they did not know each other before taking the 10-hour flight from Moscow to America.

“It’s wonderful to bring another culture into our home and to learn to appreciate all the things we have here,” said Righter. “They don’t have access to good medical or dental care. They don’t have fresh fruit or fresh vegetables. I think they both ate their own weight in food over here.”

Righter and her husband Alan have hosted children through the program for three years.

“They’ve had a very good time between dentist appointments,” said Righter of the boys. “The kids come here to have medical problems screened and to have a vacation.”

Between all the parties and sightseeing, both Stovpet and Osipenko had a lot of dental work done too | Osipenko in particular, who had more than a dozen cavities and damaged front teeth. He also needed a root canal.

“I restored his front teeth so they’d look nice and he could smile,” said Bagnall. “They can smile and we went over oral hygiene with them. I taught them how to brush and introduced them to flossing. Hopefully there’ll be some carry-over by them.”

The region Stovpet and Osipenko call home has not been the same since the morning of April 26, 1986, when an explosion at the Chernobyl nuclear power station expelled 190 tons of toxic materials into Belarus and northern Ukraine.

More than 20 years later, health problems and poverty continue to plague the residents who have remained in the area. More than 5 million people | and 1 million children | continue to live in contaminated zones, according to a United Nations report.

“Radiation, you can’t see it, you can’t smell it, you can’t taste it,” said Natallia Psel, a translator from Belarus with came to the United States with the Chernobyl Children’s Project. “Because of this, a lot of children have diseases.”

“Economic conditions don’t allow for the people to move away,” said Righter. “The kids have very high radiation levels in their systems.”

Righter said many of the luxuries we enjoy on a daily basis are new to Stovpet and Osipenko, whether it is travelling in a car or moving through an electrically-controlled door.

More importantly however, is the medical and dental attention they receive, she said.

“They don’t use any anesthesia and from what I understand they don’t have any dentist offices in the small towns,” said Righter of the boys’ homes. “It’s wonderful to see them get healthy over the month and bring back an aspect of hope to their country. They have a more positive attitude.”

Bagnall said poor hygiene and diet and not having fluoride in their drinking water likely led to the boys’ teeth needing so much work.

“Health-wise it’s really important. Just getting out of the Chernobyl area for a month can add some years to their life,” said Bagnall. “I think for any kid coming to the United States, it’s just a lot of fun. I think it’s a great experience for them. They might not appreciate what I did as much right now, but maybe later.”